Title
×
Vai ai contenuti
×
×
Jò Badamo is an Italian painter; he was born on the 16th November 1965, in Castellammare del Golfo, Sicily, where he still lives and works. Since he was a child, his love for Art started to grow day by day; he searched for relevant expressive language in 1997.
Fascinated to various episodes told by his grandparents and the father (when he was a child), describing the hard life of the farmers who lived a simple life, in a world so genuine in direct contact with nature, and above all proud of their human values.
From here, his Art begins to take its first steps, and his ambition is showing the new generations the "origins" from which we all come. Through these memories, he gives life to the first artistic phrase, sinking, to recover a monument to peasant civilization.
At the end of 1999, he met the well-known Art Critic Nic Giaramita from Trapani; this opportunity begins his real artistic career. Nic begins to show curiosity about him, so after few months of collaboration and studies, precisely on 12th August 2000, he is ready for his first solo painting exhibition. Indirect contact with the public decree his high artistic and stylistic qualities, especially for his clean and exciting way to paint with the Monochromatism technique.
This "new adventure" brings him outside of the urban area of ​​origin. After five years between painting and reflection, intending to experiment with new techniques, at the beginning of 2005, he manages to set up another solo painting exhibition, but with an expressive module just the opposite of the initial, projecting himself into a new artistic language, towards surrealism, decreeing the current expressiveness artistic.
At the end of the same year, together with other artists, he joined a new artistic current called "Dianoetic Impressionism", sharing the fundamental principle of the movement itself. But the following year, the artist decided to detach himself from the artistic current to vent to his innate search for new applications, leading him to continue independently. 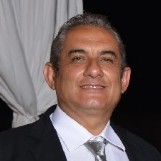